BUT WAIT!
Here comes an entire tabla solo in Jhaptal!

On Aug 21/12 I performed a 1 hour solo at a très cool spot called Musideum in Toronto. The entire thing is on video, and here's part numero uno:


That is Rattan Bhamrah on Esraj, and he's SO awesome to play with, I really can't say enough. You might remember him this video, or maybe this one, or this audio clip.

We start with a lovely Alap from Rattan, and then move into an improvised tabla introduction that probably (…ok, definitely) breaks all sorts of rules. The material is drawn from a Peshkar I heard (but didn't formally learn) while I was studying with Pt Suresh Talwalkar in Pune, a Palta Theka I learned from Pt Swapan Chaudhuri and some Khanda Nadai material (quintuplets*) I learned from mrdangist Karaikudi Mani in Chennai. Any rule breaking is 100% my doing. So….it's a bit of a mixture, but I wanted something really slow and mellow to start the solo. It's maybe easier to extend the playreallyfastattheend part of the solo, so it was a personal challenge to extend the slooooow unfolding of things. 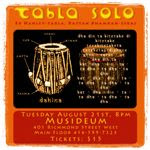 I decided to play the first couple of sections on a low tabla as I think it suits the material, plus those low drums sound so earthy and nighttime-y. Higher tabla comes into play later. The baya is clay, which doesn't sustain quite as well as metal, but it won the 'which baya?' shootout the day of the show.  Plus it's made of clay! More old-school earthy factor! All three drums are made in Kolkata by Mukta Das via Kala Kendar in Toronto.

I tried to cover as many types of repertoire as I could in the solo. Here's what's coming: a proper Peshkar->Kaida, a few Kaidas, Kaida-Relas, Relas, a Gat, some Parans, an Amad and a few Chakradars. I covered as many gharanas as possible as well: Lucknow, Farukhabad, Delhi, Punjab and Ajrada (though this last one is possibly not accurate). I'm not sure i know any Benares gharana material actually….hmm. Unless I do and don't know it? Possibly.

There's material from almost all of my teachers: Pt. Suresh Talwalkar, Pt. Swapan Chaudhuri, Pt. Anindo Chatterjee, Subhajyoti Guha, Sri Karaikudi Mani and my first tabla teacher, Ritesh Das. Disclaimer: Some of it isn't native Jhaptal, but adaptations of Tintal material, and I'll talk about how that works when it comes up.

I did a little talk at the beginning of the show (not sure I'll include it in the videos, as I rambled a bit, and even said 'blah blah blah' at one point 0.o!!) in case there were tabla newbies in the audience, and it was an interesting challenge to try to talk about this incredibly complex and obscure artform in a concise way. I came with a simple way of describing a solo that I think works:

A tabla solo is a series of percussion vignettes that all take place in a rhythmic cycle with a fixed number of beats, accompanied by a looping melody that marks the time. The solo unfolds gradually, moving through different types of repertoire, from slow to fast, long to short, improvised to composed, simmering to explosive. 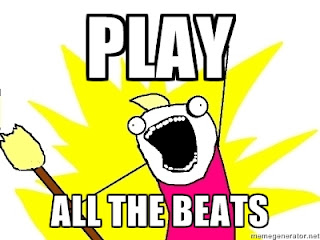 Sounds a little less intimidating than "ONE HOUR DRUM SOLO!! Three THOUSAND Six HUNDRED seconds of reallyreallyfast drumming!! w00t!" Which, let's face it, is not for everyone.

Then I went on and on and on forever trying to explain the cyclical nature of time in Indian music, the concept of tihais, the role of the lehara, types of repertoire, gharanas, bhari/khali, tabla language, drumheads made of goats and iron and rice…  oh my. Yeah… not going to include the pre-show talk.

The goal, of course, being to introduce a wider audience to what I think is one of the richest percussion languages and traditions on our lovely planet earth.

I'll be piling the videos on as fast as I can edit them so keep an eye out. You can always sign up with the Feedburner email thingy (on right side over yonder->), which will let you know when a new post arrives, or do the Facebook 'like' thingamajig.

*In this episode of Get Your Tabla Geek On: 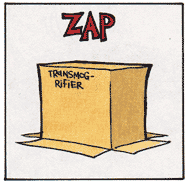 Quintuplets (5 subdivisions of the beat). Time to transmogrify!!….if you play a phrase of 4 quintuplets** it will take 4 beats. If you then play the same phrase straight, i.e. 4 subdivisions of the beat (aka Chatusra), then it will fit into 5 beats. And vice-versa of course….take any Chatusra Jhaptal material, play it in Khanda Nadai, and you'll be in Tintal!

So…one beat per line….eeeeeverybody recite along and clap on the first word in each line!

PS I filmed with 4 cameras…I had a 5th that didn't record, and you can see me tinkering fruitlessly with it in the video. It was going to be a really cool shot looking up the Esraj from below. [sadface]  BUT…my video projections seemed to work, though someone, bless their nerdy nerdy mind, did notice that the kaleidoscope plugin I used in FCE gave the images 8 sides instead of 10! The horror!! Ten sides would have been ideal of course, but I couldn't figure it out. More about the video projections in a later post.

PPS Making sure quintuplets was the right word, I checked a couple places, and I love that they're referred to as 'irrational rhythm' in western music. Lol. No wonder tabla players are so temperamental!! In other news, Irrational Rhythm is a great album name. Just sayin'.

PPPS I am available for concerts, lecture demonstrations and workshops as well as classes, both online and in person. Drop me a line.
Posted by Tala-Wallah at 8:57 PM