What is a kaida?

A good friend of mine asked me this when I told him about this blog. He's a very accomplished musician and composer who has studied south Indian music, but he's never studied tabla theory or practice. I agreed that an explanation of some sort is in order.

Disclaimer:
It is, I'm discovering as I write this, fairly difficult to explain what's going on here for people who aren't already in the know. The explanation usually takes place over many many classes, replete with examples and exercises, during, say, the first 6-12 months of study. The kaidas themselves are the vehicle for the information, so writing it down is  tricky, to say the least. The following is way longer than I intended it to be, and not for the faint of heart, but there's lots of explaining to do, so here goes...

To start at the beginning: this is a blog of tabla solo recordings, with a focus on kaidas and compositions in the kaida family.

Tabla is a percussion instrument used in north Indian classical music, as well as in folk, devotional and increasingly, popular music, both inside and outside India. 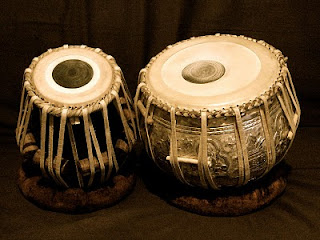 The history of tabla is slightly contentious, and I'm not going to wade in with an opinion (did i mention I'm no scholar?) The Wikipedia entry for tabla changes on a regular basis, and not just a bit...it get's completely rewritten, so a couple of well-spaced visits to the tabla entry will give you a range of opinions ;)

Kaida is a form based on theme and variation. A rhythmic seed (theme) is introduced, which is then used as a basis for elaboration through improvisation and/or composition.

The word kaida is an Arabic word meaning 'rule' or 'a system of rules'. The rules for playing a kaida are complex, but in short, one must only use the bols that are in the original theme, follow the rules of tala, and maintain the bhari-khali structure.

Each of those terms requires lengthy explanations, and I will try to explain these in detail over the course of this project. As I mentioned, I'm not a scholar or a writer, so I would refer anyone who is interested in knowing more to an excellent series of books by David Courtney.

Tala: time is cyclical in Indian classical music. Rather than time signatures with bars and beats, rhythmic cycles are used.

So, a tala is a rhythmic cycle of a certain number of beats. For example, 7, 8, 12, 16. I'll identify the rhythm cycle by name and number of beats in each post.

Bhari-Khali: in a nutshell: full-empty, or, as I prefer, open-closed. As mentioned before, a set of tabla consists of a pair of drums, a treble drum (dayan), and a bass drum (bayan). Tabla strokes are played on either one or the other drum, or on both simultaneously.

There are what I think of as 2 states of many strokes played on tabla: an open state and a closed state. Water and ice are the same material, but in different states, if that helps with the concept. So, any stroke that has an open, bass component, can be played without that bass component, or in a 'closed' state. The open stroke Ghe (an open, resonant bass stroke on the bayan) can be closed by playing a stroke so the drum doesn't resonate. Instead of a 'boom', one gets a 'slap', called Ke. A combination stroke, played on both drums, can be closed in the same way, but keep in mind that only the bass component changes. The stroke Dha is a combination of Ghe on the bayan, and Na on the dayan. To close this stroke, one simply omits the Ghe part of the stroke, playing only the Na (which then changes name to Ta in most cases and is an example of why writing about tabla is tricky, and is why it is almost impossible to learn tabla from a book... or a blog for that matter!).

Some tabla strokes are only played on the dayan, and have no 'closed' state.

Are you completely lost yet? The important thing, when listening, is to notice what happens with the bass strokes, and to listen for the pattern repeating without the bass strokes.

So, to summarize: any kaida theme or variation has 2 parts: an open part, and a closed part. These 2 parts are essentially the same material, but the second time it is presented in a different state. First we hear it open, then closed.

But... it's not that simple! The open part often closes before we get to the closed part, and the closed part opens up again about 1/2 way through. So, only about 1/4 of the material is actually without bass strokes, and where things open and close changes, depending on the kaida, the tala, the phrases being used, the player's aesthetic choice at that moment in time, the prevailing wind, etc. (Ok, I'm kidding about the wind part...)

A crude version of the above can be illustrated thus: (O=open, C=closed, and the material repeats, in a different state, after the bar line: |)

Which, using my crude O/C illustration method, would be shown roughly like this:

So, this is our theme. The first line is the Bhari, and the second line is the Khali. The actual closed strokes are in italics. So, Dha became Ta, and Ghe became Ke, and Thun is the closed version of Dhin.

Bols:
At this (late) point, I should explain tabla language. Tabla is taught through an oral tradition, so, passed down from teacher to student verbally. Every stroke that can be played on tabla can be spoken. Indeed, must be spoken! This is how tabla players learn, compose, improvise, remember. These words are called bols, and they are very specific: each bol is an instruction to play a certain stroke. There are bols for each sound that can be made on tabla, whether on the dayan, or on the bayan, or simultaneously on both drums.

The language itself is beautiful on a number of levels: the bols are onomatopoeic, and a well delivered recitation of a tabla composition can be as beautiful as the performance.

A combination stroke, (i.e. a stroke played simultaneously on both drums) has one bol, and so contains an instruction for both hands. If one plays Ghe on the bayan, and Na on the dayan at the same time, one gets a new stroke: Dha.

Formatting permitting, let me see if I can show how this works:

Someone once said something like: 'Writing about music is like dancing about architecture' and I wholeheartedly agree! Best to listen.

On a side note, tabla players are often seen mumbling to themselves and counting on their fingers in public. This is perfectly normal. We're practicing! Although i know one person who almost got into a car accident while calculating a tricky tihai, and I've walked blindly into traffic on more than one occasion...

On to the next relevant term:

Lehara: a melodic ostinato that outlines the tala. A melody that helps the listener and the performer hear the rhythmic cycle. When listening to a tabla solo, it's useful to tune into the lehara initially, and figure out where the time cycle is. Beat 1 is the strongest, and is usually pretty obvious, but not always. Indian rhythm has a lot of tension and release, and without any kind of context or framework for the drumming (the lehara, or some other way of marking the tala cycle), tabla solo can sound like a blistering stream of notes. The lehara provides a frame of reference.

In a concert (or recording), the lehara would ideally be provided by an instrument called a sarangi (IMHO), but dilruba, esraj, violin, sitar, sarod or even voice can be used. Or, unfortunately, harmonium.

In the case of this blog, I don't have access to any of the above instruments, (or people to play them once a week!) but I do have a funky little 5-string electric mandolin (I just love U. Srinivas!) that I will play the leharas on. I don't like this anymore than you do, believe me, but I'm sure I'll get better over the year. Still, at least the leharas aren't sequenced, and at least it's not harmionium!

The kaida form:
Kaida is a very strict form. There are rules. Here's a rough map of what happens during the presentation of a kaida:

1. establish the tala (the context, if you will)
This is done in 2 ways: by the lehara, which marks the time cycle melodically, in the case of a tabla solo, and by the drummer, who plays the theka -a series of strokes specific to each tala. The thekas for some common talas:

2. introduce the kaida theme slowly
The theme of the kaida is presented at 1/2 or even 1/4 of the eventual speed. This allows the listener to clearly hear the thematic material, and allows the player to establish exactly what they're about to do.

There is no way I am attempting to illustrate this with blogger's primitive text editing, but maybe photoshop can help:

4. Double speed!
Play the kaida theme at 2x, or even 4x the speed of step 2. This is the final performance speed.

5. Present variations on the theme.
This is the bulk of the kaida, and allows the player to elaborate on the thematic material in a myriad of creative ways, while still adhering to the rules stated way back at the beginning. The construction of variations is such a massive subject I'm not going to attempt to get into it here. Hopefully, I'll be able to use examples over the course of this project.

6. Finish with a tihai
A tihai is a rhythmic pattern repeated three times, ending (usually) on the first beat of the rhythmic cycle, which is called sam.

It's hard to do yourself initially, but you can try this with a friend (and earn your first 'tala geek' scout badge in the process):
person 1 counts to 16 over and over again, at a constant tempo!
person 2 joins in, starting at 1 of course, but only counts to 11, and does that three times.
Eventually, both people will hit 1 simultaneously!
Boom! Tihai! The kaida is finished!

Ok, that's a start, though I'm not sure how helpful it will be to newcomers to tabla. Feel free to ask questions, and I'll try my best to explain things further. That being said, I don't intend this to be a super scholarly treatise...I just want to engage my love of three things: tabla, recording and web geekery.

Email ThisBlogThis!Share to TwitterShare to FacebookShare to Pinterest
Labels: about, kaida, theory