About the recording process...

A few people have emailed to ask about what recording gear/process I'm using, so here it is:

My home studio is small, and it's taken a long time to get it to a functional, ergonomic place. Problem: A computer tends to sit on a desk, and tabla players tend to sit on the floor...so....hard to use the computer.
Solution? Laptop: A Macbook in my case, running Logic Pro 8.

Preamp:
Universal Audio DCS Remote Pre (sadly discontinued on the downside... but on sale on the upside!) which is great because it has a remote...so, no leaning over the drums to fiddle with knobs, it can be controlled from right beside me. Tons of great features (monitoring etc) and it also has real VU meters, which tickles me to no end.

Interface/converters:
Edirol FA-101, which is a weak link in the chain to be sure, but the jump up to a whole other level costs a whole other level of $$...so...this'll do for now. I record at 24 bit 44.1, but I've been encouraged to record at higher sample rates, which I might try.
Edit: I've added an Apogee Duet to the chain. I record through the Duet, and mix through it, but still have to use the Edirol if I want to use external effects units (FMR stuff).

Control surface:
The software is controlled with a Faderport, a very small piece of kit with a fader (imagine!), transport controls (play, stop, record etc) and sundry other functions. Very handy: again, no fiddling with the laptop (and getting baby powder all over it!), the Faderport sits right beside me.

The recording process is fairly straightforward: do it until I get a single pass that's perfect! Err...heh...or at least until I get a pass that's as close to perfect as possible. I will never be perfect, and I'm totally fine with that. 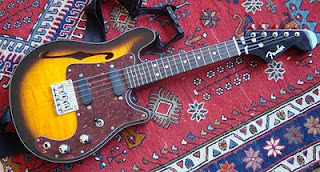 I usually pick leharas from the excellent iLehra iPod/iPhone application, transcribe them and record them on electric mandolin, or hopefully record someone else playing them. The tanpuras are recorded directly out of the iTanpura app by the same developer.

Almost all the drums I have are made by Mukta Das in Kolkata, imported by Kala Kendar in Toronto.

Mix in the box in Logic with a variety of plugins, mostly stock Logic plugs, but I've been adding some 3rd party stuff which I really like:
PSP Audioware Old Timer compressor and RetroQ eq and Bricasti M7 impulse responses for the Space Designer convolution reverb in Logic (the Amsterdam Hall is pretty sweet).

To be honest, I could spend twice as long mixing these tracks as I already do...mixing is truly an art unto itself. And mastering is fiendish wizardry...

After the mix is done, I bounce it down, and run the stereo file through some outboard gear (a rudimentary mastering process): FMR Audio RNC and RNLA and throw Logic's Adaptive Limiter on at the very end.

I have a pair of Spirit Absolute 2 passive monitors (a semi-permanent loan from my friend and recording guru Dylan Bell) that are powered by a cheap Kenwood stereo amp. My room is a disaster for mixing: 16 foot ceilings, no treatment at all, so it seems pretty silly to invest in a real amp. I have a pair of Sony 7506 monitor headphones that are great for tracking, lovely for listening to reggae on (tons of bass) but useless for mixing.

Finally, I upload the 24bit .aiff file to Bandcamp, which converts it into a variety of formats for download and embedding (including groovy visualizations!)

...and that's pretty much it. Probably more than anyone wanted to know, but that's my audio geek side for you.

Oh, a note about the embedded player: as I mentioned, Bandcamp converts the original file into a variety of formats for download (from mp3 to lossless formats like FLAC etc) but the embedded player uses a 128kbps mp3, which is lower than you want to go for most music...complex sounds like cymbals, or, (hey! whaddya know?) tabla, will suffer digital conversion artifacts at 128 kbps. If you want a better sound, feel free to download a higher quality format ;)

Thanks for listening!
Posted by Tala-Wallah at 7:23 PM

Email ThisBlogThis!Share to TwitterShare to FacebookShare to Pinterest
Labels: about