Well, it's not really heavy metal, but it's definitely not traditional...or is it?

Yup, passes the tradition test for me, with the one exception of the sounds, which begs the question...what makes traditional music traditional? Is it the content, vocabulary and grammar? or is it the instruments? pure sounds only? the people who play it? the time or place it is performed? what?

I bent the tabla tradition as much as I could here, and it didn't break.

So, what do we have:
The tala is Chartal ki Sawari, an 11 beat tala:

All the tabla material was taught by Pandit Swapan Chaudhuri in a workshop in Toronto. I'm worried he may disown me after this track, but it had to be done, and as I said, I don't think I've broken the tradition at all.

All the material Swapanji taught us in the workshop followed the sawari beautifully, so, rather than just being material in 11 beats, it is all definitely material in Chartal Ki Sawari. An important, but subtle, distinction.

I derived the bass-synth lehara from a Jaunpuri gat that sitarist Chris Hale plays...and in fact, I play the same tihai in the video (end of kaida that starts at 0.44) and at the end of the track above. It's a little obscured by drumkit-guitar chaos above though. Here:

OK OK THAT'S IT ! Enough hanky-pankying around with this fusion-con-fusion business!!

This is a rehash/shorter version of the big Jhaptal solo I played last year, but covers peshkar, kaidas, kaida rela, a sort of palta theka-rela hybrid, parans, thukra and chakradar. Material from my teachers Pt Suresh Talwalkar, Pt Swapan Chaudhuri, Pt Anindo Chaterjee and Sri Subhajyoti Guha, who very generously organized this concert. Thanks Subho!! It should be noted: Rattan and I didn't rehearse at all, and in fact, he arrived at the hall 5 min before we started playing. 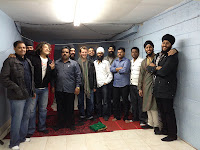 And this concludes this latest post. Thanks for reading, listening and watching. Please post your irate comments about the Chartal Ki Sawari piece below, but you should probably buy the track first ;)
Posted by Tala-Wallah at 11:31 AM