All four recordings feature super excellent, Zen-master-esque musician George Koller on Dilruba, with a pair of fretless bass treats...look for more GK in the future...

The main composition I very recently learned in a 3 day workshop with Subhajyothi Guha. He originally ID'd it as a Peshkar-Chalan but the way it's presented here is more Chalan-Kaida in character. I fell deeply in love with it immediately. Farukhabad Gharana.

This was composed by Subhajyothi's teacher, Pandit Sankha Chatterjee, himself a student of Ustad Masit Khan, Ustad Keramatulla Khan (the son of Ustad Masit Khan), AND Ustad Allarakha Khan (more on this below...). All super heavyweight tabla players. Wow. Holy lineage, Batman.

I have to share a story here...Subhajyothi very generously asked me to perform in a Saraswati Puja celebration concert at his home in Kolkata in 2002. I was nervous (1st tabla solo in India, at my teacher's house, on Saraswati Puja...talk about pressure) and I had no idea who was playing lehara. Turns out that Pandit Sankha Chatterjee was there, and very generously volunteered to play harmonium. Oh dear. Still...it went fairly well...he was of course an awesome accompanist and very gentle and encouraging, even when the wheels came of a couple of tihais right before the finish line....{blushes}

Back to the composition. Really really lovely composition. The phrases are Peshkar-like for sure (and yet have a folk-y quality, no?), and I love the way it moves...very spaciously funky (Tabla Space Funk? you heard it here first people!). I'm going to work on the Peshkar side with Subhajyothi when he comes back in September.

Where this was recorded:


Yes, I took not only my drums on vacation, but also my recording studio! My family is soooo tolerant...very grateful that they put up with my antics. ;) I was staying in a tiny cabin that was apparently (if the owner, who we dubbed The Big Lebowski is to be believed) the original Algonquin Park rangers cabin from something like 1908. An honest-to-goodness log cabin, people. Great for capturing that...ummm...woody log cabin sound that is so sought after. That carpet really ties the room together, does it not?

Disclaimer: I usually like to sit with a new composition for a long time before I attempt to perform or record it, and this is brand new in my repertoire, so....it will mature with age. ;)

Up next is another composition I learned from Subhajyothi Guha, a Punjab Kaida, composed by none other than the great maestro Alla Rakha, who taught it to Subho's teacher, Sankha Chatterjee.

Let's talk oral tradition for a second here...This composition isn't very old compared to some tabla compositions out there, but has been passed down over 4 teacher-student generations: Alla Rakha->Sankha Chatterjee->Subajyothi Guha->moi. Pretty cool to be able to trace the path through time and people, no?

This falls squarely into the Very Challenging Kaida category. "Two kinds of 'Ghe Na' " was how Subhajyothi prefaced this in class. It took me a long time to feel this...it's so technical that it demands a ton of practice before the hands get comfortable and the ears can open up...that's how it was for me, anyway. Total left hand burner, with all the deep, open Ghen strokes. Boom! Very Satisfying! Very grounded feeling too, while still floating over the tala...interesting combination. Of course, the sur Ta is sweetness and light!

By the way, Alla Rakha was my introduction to tabla. Story time! (what is with all the stories?? I must be getting old...)

When I was 18, a good friend {waves at Karen} recommended I listen to Indian classical music, which I had never heard. I picked up a Ravi Shankar cassette on the Deutsche Grammophon label, and lo-and-behold, 3rd track, side A: an Alla Rakha tabla solo. Totally. Blew My. Mind. Karen knew a fellow named Art Levine who knew Ritesh, got his phone number, and my journey started.

Here's the album. You can listen to a sample of the tabla solo in question....notice anything unusual? No accompaniment! Just pure, raw Alla Rakha 14-beat tabla awesomeness!

I love this, however....I think that some sort of accompaniment is really important for tabla solo repertoire...without the framework of the tala cycle clearly shown, a beautiful composition can turn into a blistering stream of notes, especially to non-tabla players. Plus, I find a good lehara completely hypnotizing, allowing some sort of deeper listening, not to mention helping the tension and release that is so important. not criticizing this recording in any way....just saying the lehara is the canvas on which the solo is painted. Of course, Alla Rakha could pull anything off...

This is an excerpt of a much longer recording (45 min) I did in June as prep for a tabla solo concert at Musidium in Toronto. I wasn't planning to do anything with it, but this is at a sprightly tempo, so here it is....

This was recorded in my brother's living room while I was house sitting....not quite an exotic enough location for the new tag, but, every space sounds different, plus it features a rented AKG 414 microphone. Still....to be perfectly honest, the Sennheiser 421 proves itself again and again as the best tabla recording mic I own. I always end up using about 75% 421 in the blend, even with a +$1000 mic on hand.

This is an update of the previous post, Dha Dha gegenage, with a new, vastly improved lehara. If you bought the old version, and want the new one, drop me an email and I'll send the new file. Thanks to the folks who buy tracks, by the way. Especially those folks that invariably buy each one as soon as it comes out. The support means a lot. You did know you can buy these, right? Pay what you want, starting at a buck. There's a 'Buy' link right on the player!

Did you know you can also embed these fancy Bandcamp players anywhere you like on the web? Click the 'Share', link on the player, pick your destination, pick a psycho-tastic visualizer and you're off!

PS listen for the bonus George Koller quote right at the end of the recording! I had to...just HAD to keep that in! :D 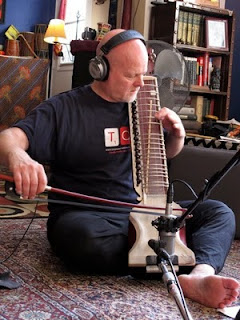 Which leads to my favourite recording of this little quartet....

Notes on the Funky Lucknow Rela:

This is a Lucknow Rela I learned from Subhajyothi Guha in the recent workshop mentioned above. Once again, it was love at first hearing. The Terekite is a real treat in here. I was practicing this at the cottage, but didn't get to record it, mainly due to the increasing difficulty of waking up early as the trip progressed. :P

While this is a Rela, I've given it a bit of a different treatment here (heh...'different' to say the least...): introduce the skeleton of the composition, and then fill in the body (aka Rang...I think....definitionally challenged, again. Anyone confirm Rang is the right term?).

Here's the deal: In the case of a kaida, the thematic material is presented at 1/2 or even 1/4 speed before the final performance speed is reached via doubling. The approach used here is different...example using a sentence:

So...rather than playing single-double, this approach uses just the first letter of each word, then fills in the rest of the letters. The trick is that the speed doesn't increase...just the density. When the maestros do this, it's like a blurry picture suddenly coming into sharp focus. With 3D glasses on. Deeply cool.

The underlying groove of this composition is so completely funktastic that I spent one whole practice session just playing the skeleton, and thought to myself...what would the skeleton and the body sound like together on different pitched tabla?

So....the experimentation part: There are 4 tabla parts on here...2 low D tabla tracks, playing the skeleton all the way through, and two high D tabla parts playing the full Rela.

I knew the funk was strong with this once the tabla was recorded....then George laid down the bass track, and my head exploded. Let me put it this way....George took the funk, distilled it into 100-proof tabla-funk moonshine, lit it on fire and launched it into orbit. Killer bass playing George...wow. And yes...that is a single take on bass. No edits. He did 2 takes, and I used the entire 2nd take, blending in parts of the first take in the alapana and at the end for extra phatness.

While the core is traditional, the addition of the fretless bass definitely makes for a non-traditional presentation, but I make no apologies. If a more modern interpretation brings people into the world of tabla, I'm all for it. Funky Lucknow Rela needs Funky Treatment. Who am I to resist?

One of the things I like about having a recording studio perpetually set up and ready-to-go is that I can embrace spontaneous ideas like this, fire up the studio, and have a result in a pretty short time. One of the best things a musician can have at home, as far as I'm concerned, is a recording studio...no matter how basic.

While the tabla parts are not quite up to my usual standards of cleanliness and precision (high speed unison is fun...but can be messy...when the train goes off the tracks, it ain't pretty), I was inspired, it was spontaneous, and it'll do for a first attempt.

I composed 2 variations in here, and I break down to the skeleton and back to the body for both...one variation has increasing Taka's...1-2-3-4, (akin to Srotogata Yati in Carnatic drumming; lit. 'stream becoming a river') and the other  has increasing and decreasing Taka's...1-2-3-2-1 (à la Mrdanga Yati in Carnatic drumming, a shape following the shape of the Mrdangam)*.

So, many thanks to Subhajyothi Guha for teaching me the three main compositions presented here, George Koller for absolutely knocking the accompaniment out of the park into outer space, and of course to Ritesh Das, who guided me expertly and patiently in the early years.

*Yati definitions from The Principals and Practices of South Indian Drumming by Dr. Trichy Sankaran


Special thanks to Memsaab for her razor sharp proofreading...my brother doesn't actually have a LOVING room...but he does have a living room. ;)