I hope everyone is doing well in this time of great upheaval and change, and are wearing a mask and washing your hands.

It’s been awhile, but I’ve been thinking about how to reignite this blog, and I have some ideas, so please stay tuned.

First up, I want to share a piece I recently released as part of a film called MUSHROOM. The complete film is available on Vimeo On Demand, and is a 31-minute journey of music, film, photography, sound design, dance and documentary, with a solid appeal to tabla players/nerds/geeks. 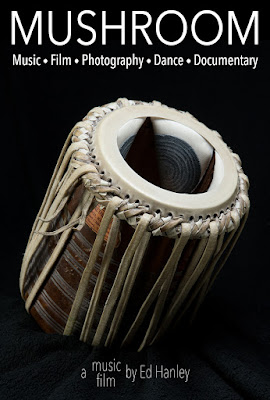 The video below is part 2 of the film, and I’m making it available for free on this blog for educational and inspirational purposes.

The music is an interlocking tabla tarang, and the visuals are a virtual tabla museum.

Please watch, and I’ll break down the music below (fullscreen, headphones etc):

The soundtrack for the film is here, if you want to listen, or purchase (though I strongly recommend experiencing it with the visual component)

So, what’s happening with the tabla tarang?

First, maybe, we need to discuss what IS a tabla tarang. We know what tabla is, and tarang means "waves" (and 'waves of tabla' is just about the best thing I can think of!) 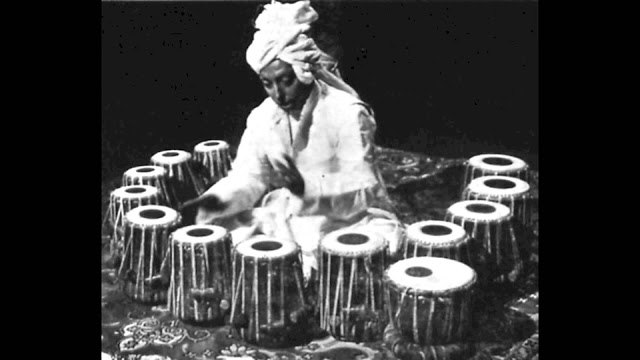 So, basically, a tabla version of a xylophone or marimba, where each drum would correspond to a single pitch... except! tabla has two pitches per drum: the open 'tun', and the harmonic 'na'. The tun is roughly a minor 7th below the na. So, if na is C, then tun is roughly the D below that. And when I say roughly, I mean it's sorta kinda somewhere around there, depending on a whole lot of factors. More on this later, and how it impacts the melodic and harmonic landscape of tabla tarang.

If you want to pop out for a sidebar on tabla tarang, here's a video of Pt. Kamalesh Maitra, and a more contemporary take by Andy Skellenger.

I haven't delved much into tabla tarang as a melodic instrument... I've only played with having a couple of drums clustered around a tabla set, and dropping the occasional na or tun in for flavour.

I have been thinking about the layering possibilities of tabla tarang for a long time, and i finally dug into it, and I want to share the process, so...

A tabla groove has multiple layers of sounds happening at once. Let's look at a simple dadra theka:

I frequently get lost isolating individual sound patterns when practicing tabla. 'what's the na pattern? what's the baya pattern?' etc and what I wanted to do, my 'what happens if?' creative instigation was:

What happens if I take two different compositions, isolate the individual stroke/sound patterns, play them on different pitched drums, and carve out some sort of arrangement?

I chose two heavy traditional compositions that i learned when i was studying with Pandit Anindo Chatterjee in Calcutta in 1999/2000:

A tintal kaida by Habibuddin Khan, Ajrada Gharana (and this is a wonderful feature)

and a tintal chalan by Wajid Hussain Khan, Lucknow Gharana: 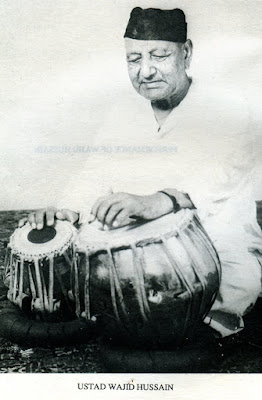 I chose these two compositions because:
a) they both start with baya only
b) they both feature dhene and dhinna
c) they both end with nagetete
d) they're both sublime, groovy and beautiful

If we look inside at the individual stroke patterns, we see this: 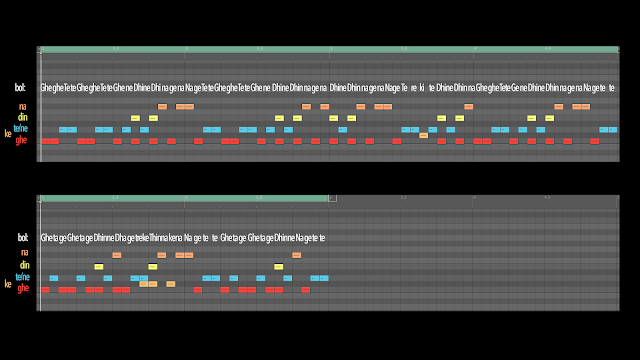 note that the first pattern is twice as long as the 2nd.

I made a pattern for each one:
Habibuddin Khan composition:
Theme, Variation 1, Variation 2, Theme

there are a whole second set of notes in the tun-pattern, and none of them are in tune with the notes in the na-pattern, so this set of drums creates its own harmonic universe. You could redo this piece exactly, but with a different set of drums, it would sound quite different simply because the relationship between na and tun is unique from drum to drum. 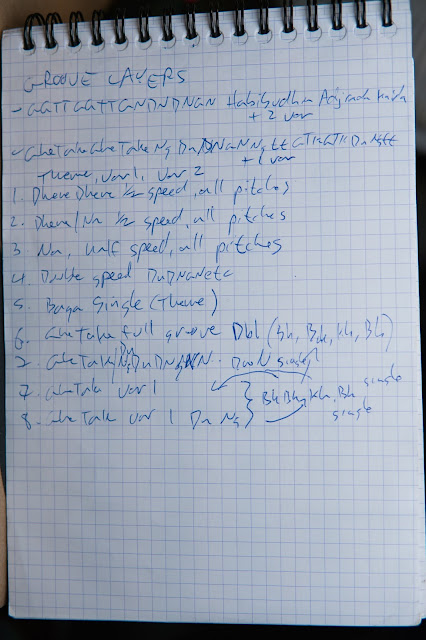 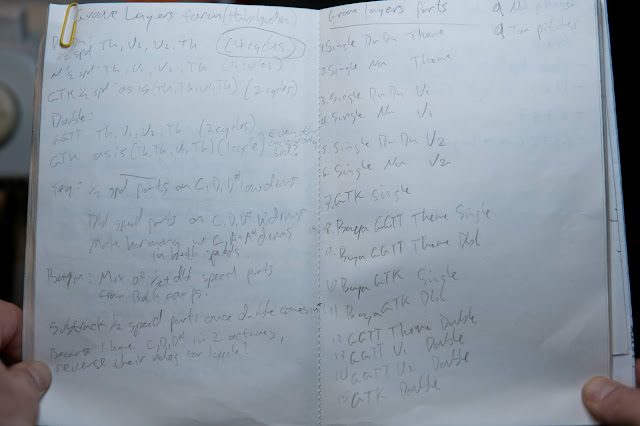 Once all the parts were recorded, I did subtractive editing to remove parts (like carving a statue out of a block of stone), and shape a progression. and yes, the edit was an absolute beast and took hours and my computer squealed frequently.

on a tech-nerd level: I also rented/borrowed a pile of gear so I could record each drum with a different microphone and preamp combination:

also on a nerd level, panning was very important, and with so many tracks, I had to make a panning map to keep track: 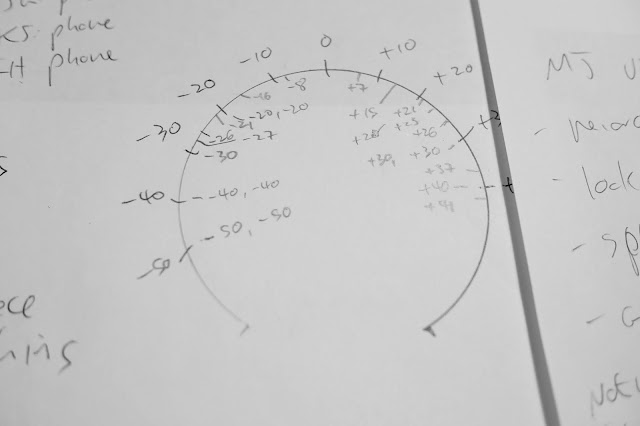 The lehara is a combo of organ samples and an incredible bass vocalist by the name of Kurt Sampson. I was inspired by a Phillip Glass piece called Koyaanisqatsi which you should go listen to RIGHT NOW! Then find the film and watch that.

The video was made during lockdown, and I set up my kitchen table as a photography workbench and photographed/videoed every drum in my apartment, as well as that retro lehara machine and my repair tools. That tripod is taped and locked down, so every drum appears accurately in relation to every other. 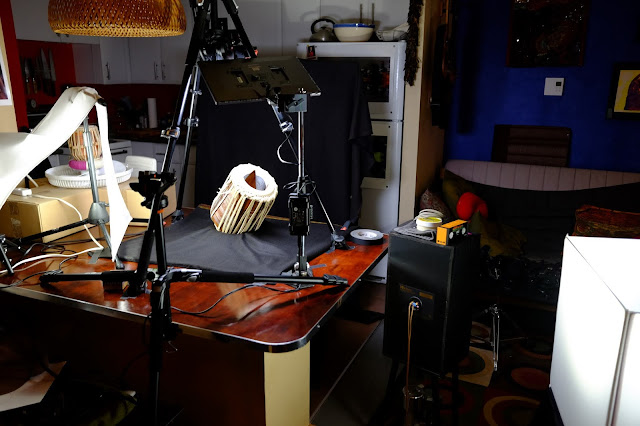 Oh! AND... the video is dedicated to tabla makers, those artisans of wood, copper, iron and skin. 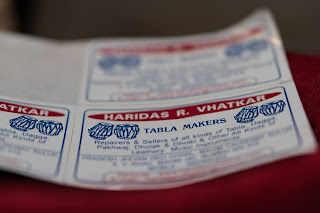 I think that's it, but I want to leave you with a challenge, if you dug this:

Try an interlocking tabla tarang.
-pick a pair of compositions (could be same tala, or different talas)
-pick a set of tabla pitches (could even be just 2, because 4 notes!)
-track just the na pattern on each pitch at single and double
-ditto tun, tete, terekite, dheneghene etc
-then baya
and see what happens.

As I mentioned, I have some ideas for this blog, including not only deep dives into traditional tabla, but also contemporary approaches, creativity in general and some guest posts. Drop me a line if you're interested in anything in particular, or if you have an idea.

Habibuddin's Nest was created with the generous creation and production support of the Ontario Arts Council and the Canada Council for the Arts.

Until next time,
Ta,
E

PS please watch the film! People seem to like it... here's a word-cloud derived from reviews: 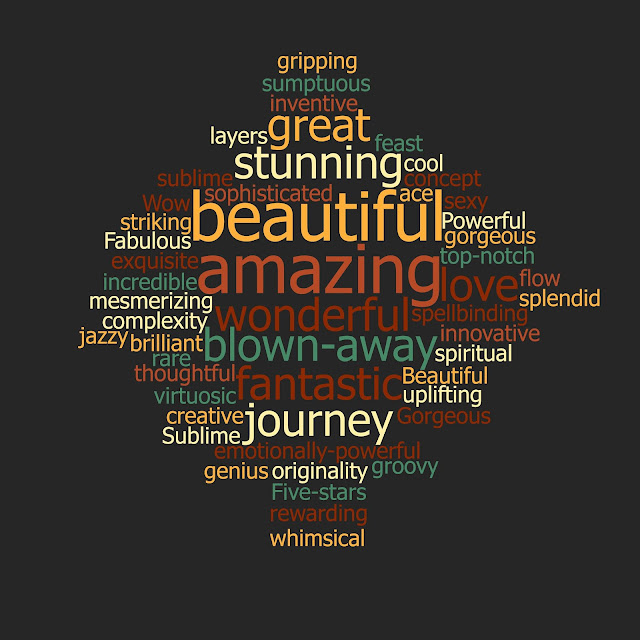 Posted by Tala-Wallah at 8:22 PM No comments: