Pandit Suresh Talwalkar on the importance of technique:
(full screen it so you can read the subtitles, unless you speak Marathi)


I find this video to be incredibly inspiring, not only because he hammers home the importance of technique, but also because he seamlessly slides into talking about style...individual style. In my humble experience, we tabla players spend so much time working on technique, learning material and imitating/emulating our teachers and heros that we often don't develop our own voice. (welcome to the wild generalizations edition of 52 Kaidas!)

Hands up tabla players if you've ever thought: "I have to play this exactly like I was taught".

To a point, that's true. The preservation of such a rich and complicated musical tradition does depend on the information being passed accurately from teacher to student. It takes time...a long time....forever, even....to understand the intricacies of technique, tala, form, the myriad of different repertoire etc. But! Tabla is an oral tradition, and like the old broken telephone game, subtle variations are introduced with each passing. Over time, those subtle variations magnify, and a transformation begins to take place. Evolution.

I have certain repertoire (the Dhadhagegenage Farukhabad Chalan-Kaida) that is a good example of this. The version I have was taught to me by Ritesh Das, who had learned it from Pandit Shankar Ghosh. When I was researching that blog post, I found out that Gnan Prakash Ghosh is credited with that particular version. So, 'my' version is the 4th generation, minimum. I've probably, over time, introduced baya inflections, accents etc etc that are my own, either through my physical limitations (what actually sounds good with my hands) or my choices of the path I take through the material, the relationships I hear between strokes etc (and I continue to refine it each time I play it) and what I like. Similarly, Ritesh probably injected his own personality when he taught it to us, and so on down the line.

I have played 'my' version to a few different tabla players, and each time, an interesting thing has happened: "oh, that composition...it's good, but the correct version is this" and they play a different version of the same composition. The soul of the composition is the same...it still has the same groove, flows well at the same speed, BUT, some of the strokes are different, the accents are different, the structure is different, and because of this, the variations, the pathways for improvisation are necessarily different. I was taught to play a sur stroke for the phrase that starts the second half (TageTete). None of the other versions I've heard have TageTete in them, and none of them use a sur stroke anywhere. It's all kinar. Now...I like the sur, I've worked on it a lot, and it's something I do well, if I can say that. So, naturally, I'm going to focus on, and expand on the variations that show my strength.

And this is my main point: That's ok.

I'm not saying neglect anything that's hard, or doesn't come naturally, but it's ok to specialize in certain focused areas of technique, repertoire, or sound production because that is what makes us unique...that is our 'style'.

Both Swapan Chaudhuri and Suresh Talwalkar told me almost the exact same thing at different times, and I'll paraphrase:

Don't imitate. If you imitate, you will never 'own' what you do, because it's not yours. You will always be weaker than the person you're imitating. It will always be a facsimile of the original. Carve your own niche, and you'll automatically be the best within that niche.


I think that the fact that tabla, with all its strict rules and freakishly hard technique, has room within it for everyone to contribute their own voice is a testament to the richness of the tradition. It's not frozen in time. It's evolving right now, as we speak, with each and every person who is practicing or performing at this very moment. That's why there are thousands and thousands and thousands of different compositions, each different from the other, and that a single kaida (for example) is a universe unto itself.

To be honest...knowing this makes it easier for me to practice. Drilling something 300 or 1000 times is daunting, boring, hurts-physically, but also mentally, and is frustrating at times. But practicing something to make it my own, rather than trying to sound *just* like X or Y tabla player is way easier. I can play, in the little kid sense of the word. I can do what I like over and over again, and I don't even notice the hours going by.

So...technique is important! You must practice!! (sound of a whip cracking). But practicing is hard! It's no fun! (sadface) BUT...if you introduce 'style' to that equation, then practicing will be easy, and technique will automatically follow.

Also...practice with other people. It really helps.

The 2nd video from my solo concert on January 15th at Musideum.

This is a live version of the Sankha Chatterjee Farukhabad Chalan-Kaida I previously recorded and wrote about in the Four-in-one super-special mega-simul-post extravaganza!:
http://52kaidas.blogspot.com/2010/08/farukhabad-chalan-kaida-punjab-kaida.html

Another video from this concert:
http://52kaidas.blogspot.com/2012/01/video-video.html

Please sign up for emails (see the Feedburner form on the right?) and feel free to fan-up on my Facebook artist page.
until next time,
TaTa!
Posted by Tala-Wallah at 3:17 PM 2 comments:

Here's a live version of a (previously posted) Farukhabad Chalan-Kaida, recorded on Jan 15 2012 at Musideum in Toronto:

Check out the timed comments, and feel free to leave your own if you're a Soundclouder.

I wrote a fairly big post about this in July 2010 when I posted the studio version. You can read about it here: http://52kaidas.blogspot.com/2010/07/dha-dha-gegenage.html

Not everything was videotaped, but there are a couple more clips coming eventually.

Here's a pic of the show, and my poster design: 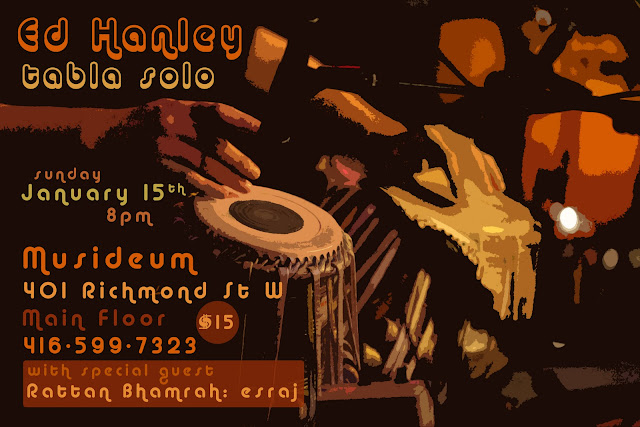 Hi all,
No lame excuses for my long absence (though I have been in India).

Just a brief post with a short video excerpt from my tabla solo concert this past Sunday.

Interesting, because it kinda breaks the super strict 'no bols that aren't in the theme' rule, though it's such a ubiquitous and lovely composition, and a fine example of how the rules can be bent for the sake of creativity, inspiration and flow.

I was fortunate to have Rattan Bhamrah accompanying me for what turned out to be a 90 minute solo in a rare musical instrument museum and store called Musideum, right here in Toronto. If you can, please go. It's simultaneously a playground and a temple of music...beautiful space.

More from this concert soon...

cheers,
Ed
Posted by Tala-Wallah at 11:09 PM No comments: