Bayan ('left'), aka Duggi: the left hand, bass drum. The shell is constructed of copper, sometimes nickel-plated, or brass.

Bol: vocal percussion. Each played stroke has a corresponding spoken sound. There are individual bols for each drum, combination bols where both drums are played together. Can also refer to strings of bols (think words, made up of letters) as in 'what was that bol again?' …'TetekeagedigheneDha' or whole compositions.

Chakradar-a large Tihai, where each phrase (palla) ends with a Tihai. Can be a fixed composition or just a really big tihai.

Chalan-a type of tabla repertoire. This one is weird…can be a fixed composition, or a groovy theme-and-variations type of thing.
Chalan-kaida-a chalan that has a strong resemblance to a kaida? Groovy theme and variations tabla rep.

Chatusra: 4 subdivisions of the beat

Dayan (aka tabla): (lit 'right') the right hand, treble drum. The shell is constructed of wood.

Gab-the black spot on the tabla and baya, made of iron filings, charcoal and rice, which gives drums their unique tone. There are a number of individual and combination strokes played on the gab, Tete, for example. Really far out technology. Need to do a post about it.

Gat-type of tabla repertoire. Fixed composition, consisting of very elaborate and extravagant combinations of strokes. Sometimes, no tihai even!

Gharana-lit. 'House'. Style. Goes back to when the tabla tradition was kept alive in families. There are 6 Gharanas: Delhi, Farukhabad, Lucknow, Adrada, Punjab and Benares, and you'll notice those are all places…

Kaida-the best thing in the world, EVER! A type of tabla repertoire with theme and variations. Lots of rules. Very cool. Big detailed post here.

Kaida-Rela-combination of a Kaida and a Real. Can mean that there are strokes in the kaida that can be played as a rela, or that the treatment of the bols goes from kaida to rela.

Khali- closed, lit. empty. Refers to the part of a Kaida where non-resonating baya strokes are used. More detail here.

Khanda Nadai-5 subdivisions of the beat

Kinar-outer edge of the tabla head, where Na is played.

Mrdanga Yati-a rhythmic phase that goes from smaller to larger to smaller again: 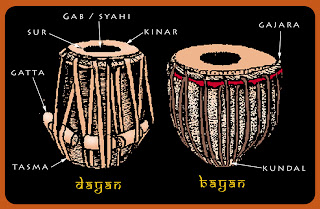 Palta Theka-an introductory tabla composition that uses the strokes of the Theka as a basis for improv/creation.

Paran: similar to a Thukra, but with strokes derived from the Pakhawaj drum, an older relative of the tabla. Also, compositions derived from Kathak dance repertoire.

Peshkar: another improvised theme-and-variations form, played at the beginning of a tabla solo, with strokes derived from the theka.

Sam-the first beat of a rhythmic cycle. VERY IMPORTANT. It's where 99.99% of tihais and fixed compositions land.

Srotogata Yati-a rhythmic shape where the phrases move from smaller to larger.

Sur: The part of the tabla head between the kinar and the gab. The stoke 'tin' aka 'ta' is played here. Sur literally means 'tone'.

Tala-the concept of time in Indian music, a rhythmic cycle.

Tihai: a phrase repeated three times, with the final stroke landing on sam, the first beat of the rhythmic cycle. Tihais commonly end both improvised and pre-composed tabla forms, and are used throughout Indian music and dance.

Tisra: triplets, 3 subdivisions of the beat

Uthan-a very elaborate introductory tabla composition that often moves through different subdivisions and has a monster tihai. The monster truck entrance of tabla.