That was: 2 hours of planning, 16 sheets of paper with a 5x5 grid, 1 pencil, 1 eraser, 4 hours of set up, 6 takes (on 2 different tunings), 4 videos, 13 photographs, 3 hours of photoshopping and 4 hours of video editing (punctuated by fits of giggling everytime the toy autorickshaw explodes).

I learned this from Pandit Suresh Talwalkar in Pune.

Awesome AWESOME practice. Slow it waaaay down, and dig into the Tetes. Remember that Ta=Na (NOT Ne). Believe it or not, this kaida will help your Terekite a whole bunch, but don't be gentle. Sweat, work out on it. Play the theme for 20-30 min at a time. Have fun. I play this almost everytime I practice.

A note on tempo: I chose 72 BPM for video reasons: Video framerate: 24FPS + Tempo: 72BPM= 20FPB (an even 20 frames per beat) which was easier for editing…though since I was subdividing each beat into 8, I had to make 1 frame adjustments every few beats. No matter…i'm not a machine, so I had to tweak here and there anyway.

Which leads us right into:


From March 1-31 I'm going to be moving my audio and video studio into Arcadia Art Gallery (680 Queens Quay West, Toronto) and making an album and a film. I'm not exactly sure what i'm going to do to be perfectly honest, but at the moment it looks like this: record a 2-3 minute tabla piece a day, and shoot & edit video to accompany each piece. A mix of music video and documentary I think ('sounds like a snake eating its own tail' is how one friend put it) . Plus I'll be showing photographs I've taken, incl a series I took of Haridas Vhatkar making tabla and who knows what else.

The pressure to create on a daily basis is part of the process, not to mention that the gallery will be open for a couple of hours a day, so the general public will be able to watch parts going down, editing and mixing going on, video being shot and edited. There will be several cameras kicking around the space, so people will be able to shoot photos and video, not to mention be in photos and video.

A CD and DVD will be available for purchase (as pre-order or after completion). I'll post once I figure out how to do internet pre-sales (Bandcamp…here I come).

Stay tuned. It could be good, or it could be a slow-motion month-long wipeout of epic proportions!

This video is not the trio, but Dylan did mix this tune, and we'll play it, and this crazy bird will be projected on the wall:

Chris Hale-sitar, voice
Ed Hanley-tabla
Chris and i will be starting the evening with some classical music, he'll join Autorickshaw on some tunes and we'll all do some Bollywood numbers:

Here's the third video from that demo session Chris and I did: Kabhi Kabhi

I'm working on video projections for the whole evening (fingers crossed we can secure a projector) and hopefully we'll video the whole gig.

PS oops...almost forgot! I had the amazing Justin Abedin in for a session recently...he laid down some epic guitar parts on track 2 of 10 Talas to a Disco Beat...soon come...soon come: 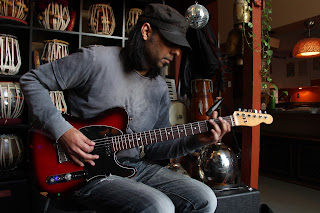