It's been awhile since I've released a new track you can buy…so here's the Audio only version with that seductive BUY button. Pay What You Want, minimum $1 as per usual.

As always, I'll get down to the absurdly detailed nitty gritty of materials and creative process.

I first heard Charanjit Singh's album Ten Ragas to a Disco Beat a few years ago, and I fell instantly and rabidly in love with it. I have listened to this entire album on repeat on more than a few cross country aeroplane rides while on tour. A few tracks are in the top 20 most played in my iTunes library (#1, 6, 7 & 10). I even bought the vinyl. It's hypnotic.

Charanjit Singh made this album in 1982 in Bombay, apparently predating the invention of the genre known as Acid House by something like 4 years. Here are a bunch of links for you to investigate further if you wish: Track 1 on Youtube; and now you want to buy it, so go here: Bombay Connection; an article in the Guardian;  parts one and two of Geeta Dayal's awesome take on the whole thing; and finally an interview with the man himself. Psst!! Dudes in the video...I love that you went to his house! Can you convince him to make a new album? :D

Anyway…as soon as I heard the first track, I thought "I have to record tabla on this song!" and then immediately: "I'll record tabla on on ALL the songs! muahahahahah!!", and then… reality set in. The tracks are already so perfect and complete, there was just no way to improve upon them, not even with tabla (gasp!), so the idea went on a back burner and simmered. In the meantime, I went to India and studied with Pt Suresh Talwalkar on a Canada Council grant, and one Jhaptal Kaida he taught me leapt out as being PERFECT for a 1982 Vintage Bombay Acid House treatment (I'll cover the kaida fully in the next video post from the solo). But…all the tracks on the album are in 8 or 16 beat cycles, and the Kaida is in 10. Hmmm. Obviously, I need to make a version of one track in 10 beats…and then (forehead !!smack!!) it crystallized: Ten Talas to a Disco Beat! Remake every track in a different Tala, using the Ragas Charanjit Singh used on the original album. Not covers, not sampling, but new tracks...in the style of Ten Ragas. A companion album, if you will. Of course, I don't have Tabla repertoire in 10 different Talas (rhythm cycles), nor have I ever made anything remotely like a primordial Acid House track in my life, but I'll cross those bridges when I come to them. Never let reality get in the way of a good idea!


Fast forward to September 2011, around the time I posted the bluster-y Year Of Jhaptal post I decided to try to tackle making just one track, using that Jhaptal Kaida. Track 1 on the 10RTADB album is Raga Bhairav, so I started there. First: bassline, then drums, then keyboards courtesy of Dylan Bell (not an easy keyboard gig as you can imagine…it took promises of beer and future recording/web design-y favours) and then I set about actually recording the tabla parts in June of this year. There are 19 or so tracks of tabla: 3 high D w Bayan (6 tracks), an A drum and a low D drum (just Dayans), all in unison; a few tracks of single hits on a high and low D Dayans w distortion (sounds like an electric guitar? it's tabla), plus the sundry Dtrkttktrkt and other filler tracks. The bottom end is completely eaten by the bassline so that's why you can't hear the bayas: The bassline is crushing them out of existence! Muahahahah! But, I'm ok with this. The bassline is more important here.

Enter a solid week of editing just the tabla parts. Then a frustrating wandering-in-the-woods period where I had so many ideas that didn't work…Suba Sankaran came over and we co-wrote melodic lines for each variation (lovely, but not quite right...it became all about the melody), a vocoder track with the vocal percussion version of the main tabla parts ('Dha treke Dhinna Gena Dhagetete' etc), w the melodic lines or baseline or keyboard parts as the triggers (I couldn't make it work to my satisfaction), a different set of effects on each tabla track! for each variation! (what are you freaking crazy? do you know how LONG that would take??) aaaaand so on, ad naseum. So….it went back in the subconscious slow cooker for a few weeks. Fast forward again to editing the videos from the Jhaptal solo. The next one in the queue is that very same Suresh Talwalkar Jhaptal Kaida, and I thought 'what if I released that video, and THEN the Ten Talas track! Holy synchrorhythmity Batman!'

Enter a kind of manic period over the past few days where I looked at the track again, stripped everything back to the basics, and lo and behold…it was all there already. I just needed to slash and burn: this this this this and this…DELETE. Finish editing, and mix. Done. Sometimes a break is all it takes. I mastered it this morning.

Which brings me to the video part…


Much like Ten Ragas, I was positively frothing with glee when I first saw Sita Sings the Blues. Here are some links: You can watch it online for free (and you really really should), or download it (I have a 4 gig HD copy and a 15 gig copy I used for editing, all free and legal) right here; here's Roger Ebert's review; and here's an interview with creator Nina Paley in Wired. I am in awe…Nina Paley is my freakin' hero: she animated the entire 81 minute movie by herself, on her home computer. Keep that in mind while you watch. Here's what she says about it:

You don't need my permission to copy, share, publish, archive, show, sell, broadcast, or remix Sita Sings the Blues. Conventional wisdom urges me to demand payment for every use of the film, but then how would people without money get to see it? How widely would the film be disseminated if it were limited by permission and fees? Control offers a false sense of security. The only real security I have is trusting you, trusting culture, and trusting freedom.

So….I wanted to remix parts of the movie. This idea was simmering for even longer than the Ten Ragas idea. Once I started the final push to finish the track, it was clear a video had to go with it. I'd already done some of the heavy lifting making video projections for the Jhaptal solo using SSTB, so it only made sense. I started on Tuesday, finished Thursday, and looked like Gollum at the end, I'm sure, complete with mutterings and preciousssings and cursessssessss. Please note: 99% of what you see is Nina Paley's work. I just chopped it up, squeezed it through kaleidoscopes, ran it spɹɐʍʞɔɐq, grabbed single frames etc etc. I did throw a few easter eggs in there, and those are my hands on the drums, filmed during the recording.

So…there you have it, a creative time-travelogue of sorts, starting in 5th century India (Ramayana), with stops in a tabla practice room in Delhi sometime in the early 1900s (the Kaida), a Bombay recording studio 1982, an animators apartment in New York in 2007 ending up in an Artist's Co-op in Toronto in 2012. I take no credit for creating ANY of this. This is a perfect example of what Austin Kleon is talking about here.

I'm not going to promise that I can complete the album, as this one track took over my life for significant chunks, but it was really fun to make, and I have material in mind for an 11 beat version...

Thank yous are in order: 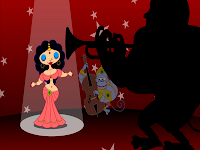 Dylan Bell for his Bomb-tastic keyboard parts
Suba Sankaran for writing a ton of (unused) melodic material and inadvertently teaching me a lot in the process
and both Suba and Dylan for letting use their livingroom as a recording studio
Santosh Naidu for convincing me to be as accurate as possible in recreating the drum and bass sounds
Gurtej Hunjan for showing me how to program the 808 drum machine in Logic to get those sounds
Jai Pahuja for patiently listening to me plan this project out for years
Andy Krehm for mastering it on short notice (we used 1/2" reel-to-reel tape in the mastering chain...exactly what Charanjit Singh would have mixed down onto! very excitement! unless he mixed down onto 1/4" tape, which is probably more likely)
Nina Paley for making Sita Sings The Blues, and writing back to me re proper credits (swoon) and generally being an inspiration
Charanjit Singh for going way way outside the harmonuim box and making an awesome record that's both traditional and cutting edge even today
Boing Boing for introducing me to both Ten Ragas and SSTB
Pandit Suresh Talwalkar for teaching me the Kaida, whipping my technique into shape, and showing me a lot of very cool tabla tools and techniques
Freya Sargent for embracing and encouraging the creative mania!

PS I'm kind of agonizing over whether this is actually a cover version or not. I don't think it is, and here's why: The Raga itself is not copyrightable, nor did Charanjit Singh invent it, the drum grooves and tempo are different, all the keyboard parts are completely different, and while the bassline is close, it's pretty different too…different rhythm, different time cycle, and different note order. But….I'm 100% sure I'd recognize it and go 'Charanjit Singh cover!' if I heard it, so that casts a teensy weensy seed of doubt. Anyone care to weigh in?
Posted by Tala-Wallah at 2:53 PM